The Chinese word zuo - 坐 - zuò
(to sit in Chinese) 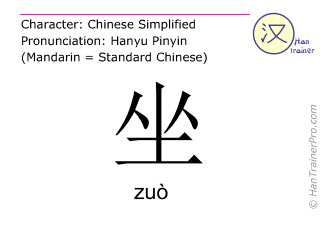 The traditional Chinese characters of zuò are identical with the modern (simplified) characters displayed above.
Topic
Ground Traffic
Character complexity

坐 is composed of 7 strokes and therefore is of low complexity compared to the other simplified Chinese characters (average: 13.1 strokes).

2 persons  |  floor, earth  |  the meanings 'to travel by' and 'to go by' only refer to vehicles one can sit in, such as trains, cars, and airplanes 坐 ( zuo / zuò ) belongs to the 500 most common Chinese characters (rank 463)
Chinese example words containing the character 坐 ( zuo / zuò )
Other characters that are pronounced zuò in Chinese
More words that mean to sit in Chinese