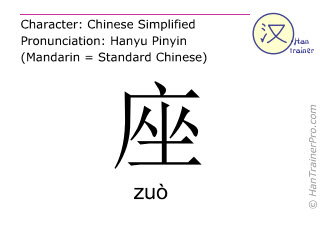 Na shulin zhong you yi zuo fangzi.
Nà shùlín zhōng yŏu yī zuò fángzi.
– English translation: There is a house in the middle of this copse.

座 is composed of 10 strokes and therefore is of average complexity compared to the other simplified Chinese characters (average: 13.1 strokes).