Note: This Chinese character can also be pronounced zhòng. However, with a different pronunciation, the meaning of the character will change as well (not yet available in this dictionary).

middle, between, in, in the course of, among, average,
center, inside, to fit for, centre 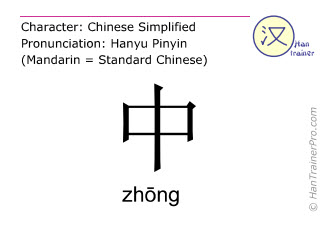 Na shulin zhong you yi zuo fangzi.
Nà shùlín zhōng yŏu yī zuò fángzi.
– English translation: There is a house in the middle of this copse.

中 is composed of 4 strokes and therefore is of very low complexity compared to the other simplified Chinese characters (average: 13.1 strokes).