Note: This Chinese character can also be pronounced jiàn. However, with a different pronunciation, the meaning of the character will change as well (not yet available in this dictionary).

classifier (for rooms), between, within a definite space, during a definite period of time, to divide, room,
to change, to block up, to put a space between, occasionally 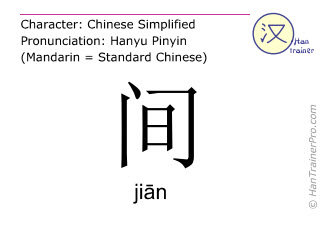 间 is composed of 7 strokes and therefore is of low complexity compared to the other simplified Chinese characters (average: 13.1 strokes).