Note: This Chinese character can also be pronounced liăo. However, with a different pronunciation, the meaning of the character will change as well (not yet available in this dictionary). 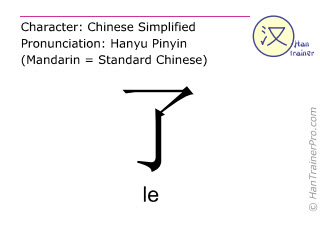 了 is composed of 2 strokes and therefore is of extremely low complexity compared to the other simplified Chinese characters (average: 13.1 strokes).

It is raining.  |  It's time for us to go.  |  this word cannot be translated literally. 'Particle' refers to its grammatical function, which usually is: to indicate that a statement has happened in the past 了 ( le ) belongs to the 10 most common Chinese characters (rank 5)
Chinese example words containing the character 了 ( le )
More words that mean particle in Chinese

Report missing or erroneous translation of le in English