Note: This Chinese character can also be pronounced dĕi / dé. However, with a different pronunciation, the meaning of the character will change as well:
If 得 is pronounced "dé", it means 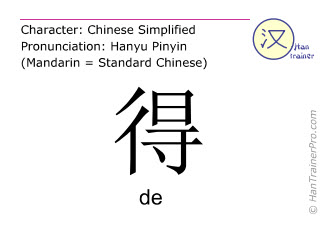 The traditional Chinese characters of de are identical with the modern (simplified) characters displayed above.
Topic
(no topic assigned)
Character complexity

She looks nice  |  He swims well  |  inserted between a verb and its complement to express possibility or capability. Also used to link a verb/adjective to a complement describing manner or degree 得 ( de ) belongs to the 50 most common Chinese characters (rank 31)
Chinese example words containing the character 得 ( de )
Other characters that are pronounced de in Chinese
More words that mean particle in Chinese