The Chinese word kan - 看 - kàn
(to watch in Chinese) 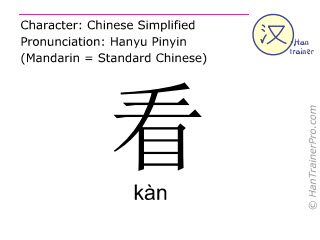 看 is composed of 9 strokes and therefore is of low complexity compared to the other simplified Chinese characters (average: 13.1 strokes).

Report missing or erroneous translation of kan in English

All content is protected under German and international copyright laws.
Version 5.30 / Last updated: 2020-09-30