The Chinese word jian - 见 - jiàn
(to see in Chinese)

to see, to meet, to refer to, opinion, insight, to interview,
view, sight, catch sight of, interview 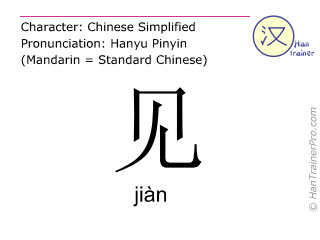 见 ( jian / jiàn ) in traditional characters
見
Topic
(no topic assigned)
Usage as a radical
见 can also be used as a radical, i.e. as a sub-component of a Chinese character. It is then called jiànzìpáng.
Character complexity

见 is composed of 4 strokes and therefore is of very low complexity compared to the other simplified Chinese characters (average: 13.1 strokes).