Note: In this special case, one of the tones is pronounced differently than the (written) Pinyin phonetic script indicates. This phenomenon is called Tone sandhi.

only, no other than,
none but 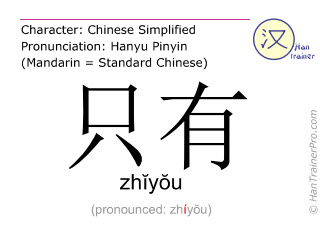 For obtaining stroke order animations, visit the links to the individual characters below.
只有 ( zhiyou / zhĭyŏu ) is composed of these characters: 只 (zhi) , 有 (you)
The traditional Chinese characters of zhĭyŏu are identical with the modern (simplified) characters displayed above.
Chinese Pinyin example sentence with 只有 ( zhiyou / zhĭyŏu ) ⓘWriting in Pinyin
Before using this Pinyin example sentence, consider that Chinese characters should always be your first choice in written communication.
If you cannot use Chinese characters, it is preferable to use the Pinyin with tones. Only use the Pinyin without tones if there's no other option (e.g. writing a text message from/to a mobile phone that doesn't support special characters such as ā, í, ŏ, ù).

Report missing or erroneous translation of zhiyou in English