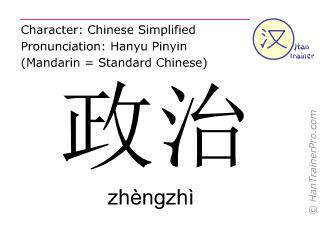 For obtaining stroke order animations, visit the links to the individual characters below.
政治 ( zhengzhi / zhèngzhì ) is composed of these characters: 政 (zheng) , 治 (zhi)
The traditional Chinese characters of zhèngzhì are identical with the modern (simplified) characters displayed above.
Topic
Politics and Diplomacy

Report missing or erroneous translation of zhengzhi in English