one, once, all, undivided, single, whole,
concentrated, 1, a, an 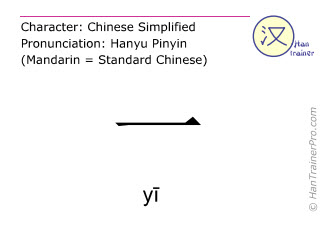 He limian you yi zhi yazi.
Hé lĭmiàn yŏu yī zhī yāzi.
– English translation: There is a duck in the river.

» Click here « and select lesson Numbers and Mathematics.
Usage as a radical
一 can also be used as a radical, i.e. as a sub-component of a Chinese character. It is then called héng.
Character complexity

一 is composed of 1 strokes and therefore is of extremely low complexity compared to the other simplified Chinese characters (average: 13.1 strokes).