The Chinese word wan - 玩 - wán
(to play in Chinese)

to play, to have fun, to keep, to toy with, something to amuse oneself, to trifle with,
to raise for enjoyment, to joke, to take things lightly 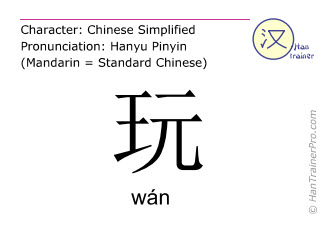 玩 is composed of 8 strokes and therefore is of low complexity compared to the other simplified Chinese characters (average: 13.1 strokes).