The Chinese word tun - 屯 - tún
(to store up in Chinese)

Note: This Chinese character can also be pronounced zhūn. However, with a different pronunciation, the meaning of the character will change as well (not yet available in this dictionary).

to store up, station, village"Why are some translations grayed out?"
Grayed-out terms are meanings of the character which cannot be used as translations. For example, 必 (bì) has the meaning must / to have to. However, the Chinese translation for "must" is not 必 (bì) but 必须 (bìxū).,
to collect, quarter 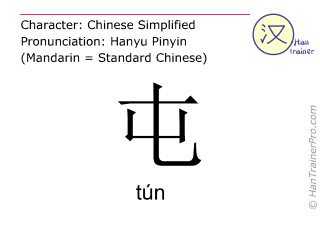 The traditional Chinese characters of tún are identical with the modern (simplified) characters displayed above.
Character complexity

屯 is composed of 4 strokes and therefore is of very low complexity compared to the other simplified Chinese characters (average: 13.1 strokes).

Report missing or erroneous translation of tun in English