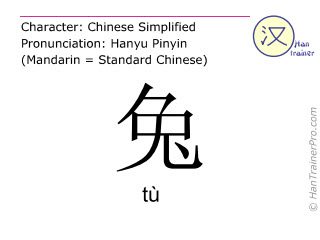 兔 is composed of 8 strokes and therefore is of low complexity compared to the other simplified Chinese characters (average: 13.1 strokes).

animal  |  memory aid: this animal often changes it's direction suddenly when running away from enemies