The Chinese word tan - 探 - tàn
(to detect in Chinese)

to detect, to investigate, to pay a visit to, to stretch forward,
to scout, to search out 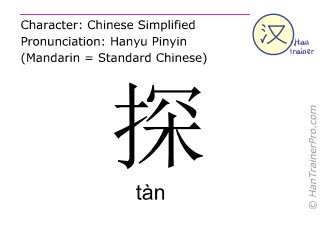 The traditional Chinese characters of tàn are identical with the modern (simplified) characters displayed above.
Character complexity

探 is composed of 11 strokes and therefore is of average complexity compared to the other simplified Chinese characters (average: 13.1 strokes).

Report missing or erroneous translation of tan in English