The Chinese word sui - 碎 - suì
(to smash in Chinese)

to smash, broken, gabby,
to break to pieces, fragmentary, garrulous 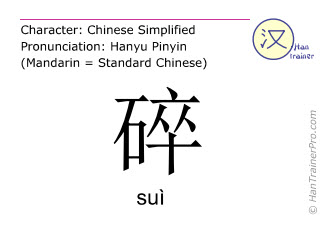 The traditional Chinese characters of suì are identical with the modern (simplified) characters displayed above.
Character complexity

碎 is composed of 13 strokes and therefore is of average complexity compared to the other simplified Chinese characters (average: 13.1 strokes).

Report missing or erroneous translation of sui in English