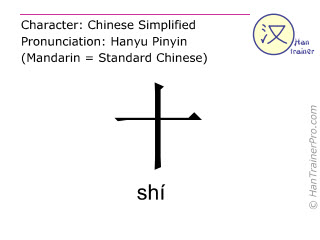 The traditional Chinese characters of shí are identical with the modern (simplified) characters displayed above.
Topic
Numbers and Mathematics
Learn 十 ( shi / shí ) with our vocabulary trainer

» Click here « and select lesson Numbers and Mathematics.
Usage as a radical
十 can also be used as a radical, i.e. as a sub-component of a Chinese character. It is then called shízìpáng or shízìtóu.
Character complexity

十 is composed of 2 strokes and therefore is of extremely low complexity compared to the other simplified Chinese characters (average: 13.1 strokes).