Note: This Chinese character can also be pronounced shào. However, with a different pronunciation, the meaning of the character will change as well (not yet available in this dictionary).

less, little, a little, to be missing (things), deficient 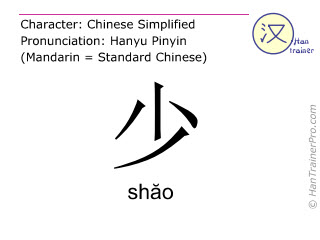 The traditional Chinese characters of shăo are identical with the modern (simplified) characters displayed above.
Topic
30 words from HSK level 1
Learn 少 ( shao / shăo ) with our vocabulary trainer

少 is composed of 4 strokes and therefore is of very low complexity compared to the other simplified Chinese characters (average: 13.1 strokes).

Report missing or erroneous translation of shao in English