Note: In this special case, one of the tones is pronounced differently than the (written) Pinyin phonetic script indicates. This phenomenon is called Tone sandhi. 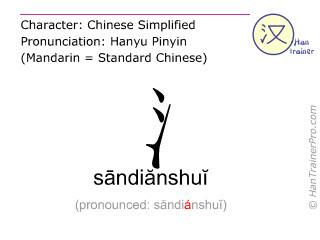 The traditional Chinese characters of sāndiănshuĭ are identical with the modern (simplified) characters displayed above.
Character complexity

氵 is composed of 3 strokes and therefore is of very low complexity compared to the other simplified Chinese characters (average: 13.1 strokes).

river  |  lake  |  This is just a radical, not an entire Chinese character.

Report missing or erroneous translation of sandianshui in English