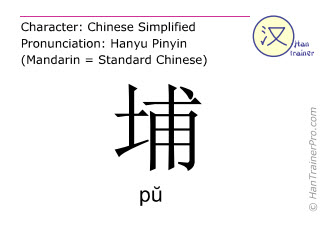 The traditional Chinese characters of pŭ are identical with the modern (simplified) characters displayed above.
Character complexity

柬埔寨 is composed of 10 strokes and therefore is of average complexity compared to the other simplified Chinese characters (average: 13.1 strokes).
Chinese example words containing the character 柬埔寨 ( pu / pŭ )
Other characters that are pronounced pŭ in Chinese
More words that mean port in Chinese