The Chinese word pan - 盼 - pàn
(to expect in Chinese)

to expect, to look,
to hope for, to long for 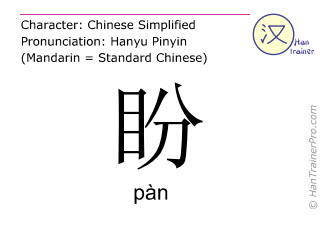 The traditional Chinese characters of pàn are identical with the modern (simplified) characters displayed above.
Character complexity

盼 is composed of 9 strokes and therefore is of low complexity compared to the other simplified Chinese characters (average: 13.1 strokes).

to look around  |  to look forward to

Report missing or erroneous translation of pan in English