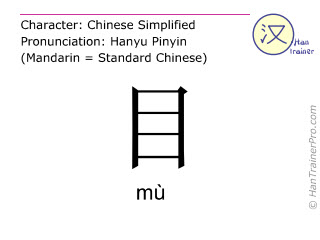 目 is composed of 5 strokes and therefore is of very low complexity compared to the other simplified Chinese characters (average: 13.1 strokes).

sight  |  Also used as a unit (Mesh, usually refers to the number of openings in the sieve per square inch.) 目 ( mu / mù ) belongs to the 500 most common Chinese characters (rank 217)
Chinese example words containing the character 目 ( mu / mù )
Other characters that are pronounced mù in Chinese
More words that mean eye in Chinese