Note: This Chinese character can also be pronounced liáng. However, with a different pronunciation, the meaning of the character will change as well:
If 量 is pronounced "liáng", it means 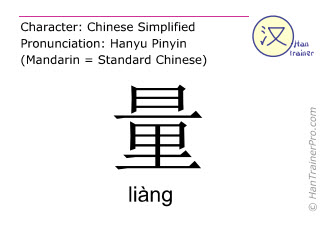 The traditional Chinese characters of liàng are identical with the modern (simplified) characters displayed above.
Topic
Seeing the Doctor
Character complexity

量 is composed of 12 strokes and therefore is of average complexity compared to the other simplified Chinese characters (average: 13.1 strokes).
Chinese example words containing the character 量 ( liang / liàng )
Other characters that are pronounced liàng in Chinese