The Chinese word jie - 解 - jiĕ
(to separate in Chinese)

to separate, to untie, to dispel, to solve,
to relieve, to explain 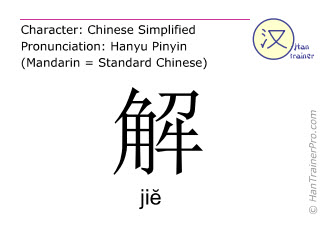 The traditional Chinese characters of jiĕ are identical with the modern (simplified) characters displayed above.
Topic
Events, Movements, Changes and Directions
Character complexity

解 is composed of 13 strokes and therefore is of average complexity compared to the other simplified Chinese characters (average: 13.1 strokes).