The Chinese word jiang - 将 - jiāng
(to be ready in Chinese)

Note: This Chinese character can also be pronounced jiàng. However, with a different pronunciation, the meaning of the character will change as well (not yet available in this dictionary).

to be ready, to use, general"Why are some translations grayed out?"
Grayed-out terms are meanings of the character which cannot be used as translations. For example, 必 (bì) has the meaning must / to have to. However, the Chinese translation for "must" is not 必 (bì) but 必须 (bìxū).,
to be about to, to get 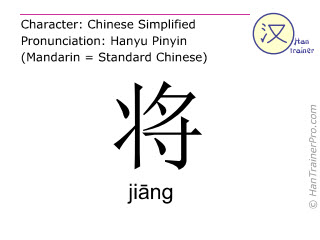 将 ( jiang / jiāng ) in traditional characters
將
Chinese Pinyin example sentence with 将 ( jiang / jiāng ) ⓘWriting in Pinyin
Before using this Pinyin example sentence, consider that Chinese characters should always be your first choice in written communication.
If you cannot use Chinese characters, it is preferable to use the Pinyin with tones. Only use the Pinyin without tones if there's no other option (e.g. writing a text message from/to a mobile phone that doesn't support special characters such as ā, í, ŏ, ù).

将 is composed of 9 strokes and therefore is of low complexity compared to the other simplified Chinese characters (average: 13.1 strokes).