The Chinese word gou - 勾 - gōu
(to mark in Chinese)

Note: This Chinese character can also be pronounced gòu. However, with a different pronunciation, the meaning of the character will change as well (not yet available in this dictionary).

to mark, to cancel, to hook, to join, to seduce, to evoke,
to put a check, to cross out, to connect, to entice 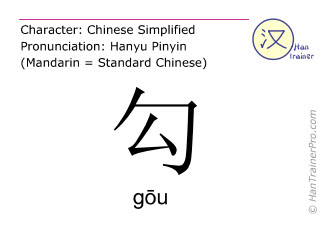 The traditional Chinese characters of gōu are identical with the modern (simplified) characters displayed above.
Character complexity

勾 is composed of 4 strokes and therefore is of very low complexity compared to the other simplified Chinese characters (average: 13.1 strokes).

to draw the outline of  |  to entice