The Chinese word fu - 孚 - fú
(to believe in in Chinese)

to believe in,
to inspire confidence in sb. 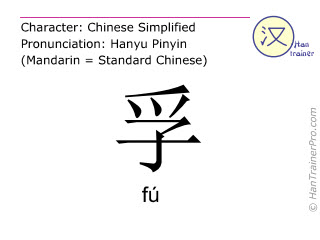 孚 is composed of 7 strokes and therefore is of low complexity compared to the other simplified Chinese characters (average: 13.1 strokes).

enjoy great popularity  |  to be convinced