minute, to divide into parts, to allot, to distinguish, one tenth of something,
to distribute, the smallest Chinese money unit, one tenth, one tenth of 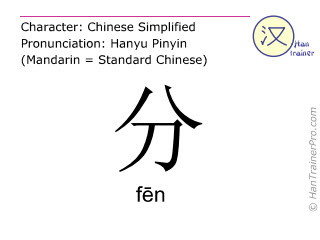 The traditional Chinese characters of fēn are identical with the modern (simplified) characters displayed above.
Topic
Time: Periods of time
Character complexity

分 is composed of 4 strokes and therefore is of very low complexity compared to the other simplified Chinese characters (average: 13.1 strokes).