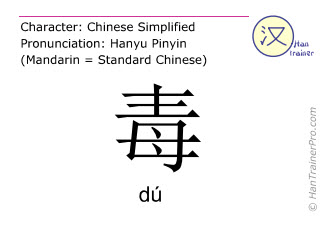 The traditional Chinese characters of dú are identical with the modern (simplified) characters displayed above.
Character complexity

毒 is composed of 8 strokes and therefore is of low complexity compared to the other simplified Chinese characters (average: 13.1 strokes).

a bowl of rice...  |  ...with two poisonous pills inside  |  (memory aid) 毒 ( du / dú ) belongs to the 1000 most common Chinese characters (rank 787)
Chinese example words containing the character 毒 ( du / dú )
Other characters that are pronounced dú in Chinese