ordinal , a prefix indicating order, the residence of a high official 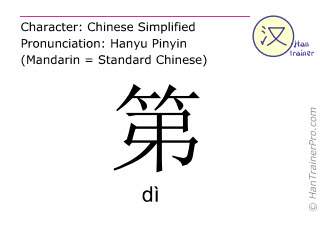 The traditional Chinese characters of dì are identical with the modern (simplified) characters displayed above.
Topic
Numbers and Mathematics
Learn 第 ( di / dì ) with our vocabulary trainer

第 is composed of 11 strokes and therefore is of average complexity compared to the other simplified Chinese characters (average: 13.1 strokes).