times, next, sequence, the second, quantifier (for actions or events),
order, multiplied by 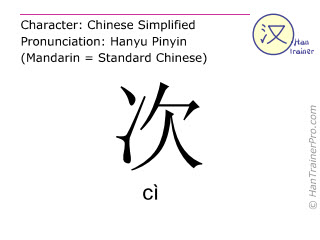 次 is composed of 6 strokes and therefore is of low complexity compared to the other simplified Chinese characters (average: 13.1 strokes).

order  |  frequency  |  e.g. 'I have been to China three times' 次 ( ci / cì ) belongs to the 500 most common Chinese characters (rank 166)
Chinese example words containing the character 次 ( ci / cì )
Other characters that are pronounced cì in Chinese
More words that mean next in Chinese