The Chinese word chong - 充 - chōng
(to fill in Chinese)

to fill, sufficient"Why are some translations grayed out?"
Grayed-out terms are meanings of the character which cannot be used as translations. For example, 必 (bì) has the meaning must / to have to. However, the Chinese translation for "must" is not 必 (bì) but 必须 (bìxū)., to serve as, to pretend to be,
to charge, to act as, to pose as 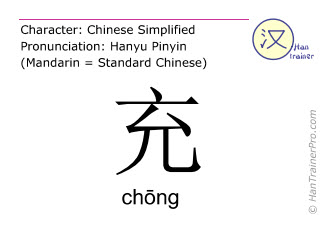 The traditional Chinese characters of chōng are identical with the modern (simplified) characters displayed above.
Character complexity

充 is composed of 5 strokes and therefore is of very low complexity compared to the other simplified Chinese characters (average: 13.1 strokes).