The Chinese word chi - 吃 - chī
(to eat in Chinese)

to eat, to suffer,
to take something (e.g. a chess piece) from a game opponent, to annihilate 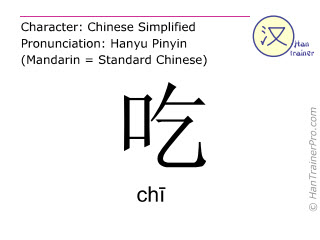 吃 is composed of 6 strokes and therefore is of low complexity compared to the other simplified Chinese characters (average: 13.1 strokes).