The Chinese word cheng - 乘 - chéng
(to multiply in Chinese)

to multiply, to travel by (ship, airplane, bus), multiplied by,
to travel 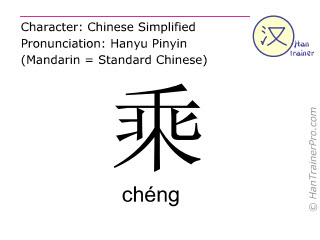 The traditional Chinese characters of chéng are identical with the modern (simplified) characters displayed above.
Topic
Numbers and Mathematics
Learn 乘 ( cheng / chéng ) with our vocabulary trainer

乘 is composed of 10 strokes and therefore is of average complexity compared to the other simplified Chinese characters (average: 13.1 strokes).