Note: This Chinese character can also be pronounced jū. However, with a different pronunciation, the meaning of the character will change as well (not yet available in this dictionary). 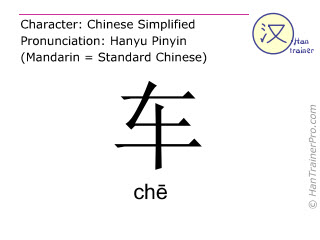 车 ( che / chē ) in traditional characters
車
Usage as a radical
车 can also be used as a radical, i.e. as a sub-component of a Chinese character. It is then called chēzìpáng.
Character complexity

车 is composed of 4 strokes and therefore is of very low complexity compared to the other simplified Chinese characters (average: 13.1 strokes).

Report missing or erroneous translation of che in English