ice, to put on ice 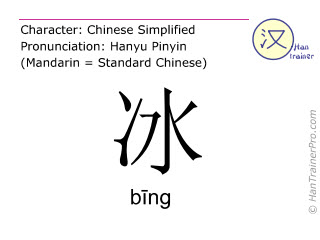 Neng gei wo xie bing ma?
Néng gĕi wŏ xiē bīng ma?
– English translation: Can you give me some ice?

冰 is composed of 6 strokes and therefore is of low complexity compared to the other simplified Chinese characters (average: 13.1 strokes).